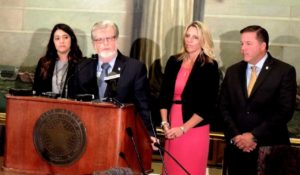 Four Republican State Senators think all legislators should be directly involved in the creation of a state budget and they intend to file a bill changing the budget process.

Whether it’s drawing up a bill on gross production taxes or funding state energy agencies, the senators say their intent is to increase transparency and accountability in how tax dollars are being used by the agencies.

Sen. Roger Thompson, R-Okemah is the principal author of the legislation.

“The biggest responsibility the Legislature has is writing and passing the budget. One way or another, it impacts every single person in our state,” he said in announcing a bill to implement line-item budgeting. “By digging deeper and really  examining all the programs, services and other expenses these major agencies are funding, the public is going to be more fully informed about how those dollars are being used, and lawmakers will have the ability to be better stewards of those dollars.”

He said line item budgeting is not a new concept and was done through 2009.

“But the bottom line is lawmakers are the representatives of the people—we are making decisions on their behalf and are accountable to them in ways state agencies are not. This is our responsibility, especially as we face continued budget challenges,” he added.