Workers’ Comp Training Conference to be held in October

Counties See Economic and Business Wins So Far This Year 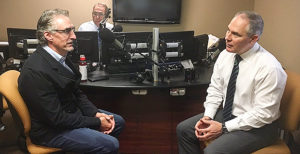 EPA Chief Scott Pruitt’s spokesman is taking some heat for allegedly threatening to call security on reporters who were trying to see Pruitt during an event last week on the University of North Dakota campus.

The incident prompted the National Press Club to express concern with President Jeff Ballou tweeting his group is “looking into” the accusations. The story was first reported by the Grand Forks Herald which said EPA spokesman Jahan Wilcox made the threat on reporters.

The dustup happened as Pruitt visited the Energy and Environmental Research Center at the University of North Dakota. He was joined by North Dakota gov. Doug Burgum, Rep. Kevin Cramer, R-N.D., and Sen. John Hoevern, R-N.D.

Two reporters for the Harold had gone to the Research Center before the start of the event and were asked to leave before the EPA spokesman threatened to call police. The newspaper reported a university police officer arrived and insisted the building and its grounds were private property and demanded the reporters move away from the center’s front door.

Members of the Sierra Club had earlier been asked to leave the front door area and stand across the street.

EPA spokeswoman Liz Bowman was asked about the article and explained the reporters were kept out of the meeting to allow those attending to speak freely.

“This bipartisan event with the community’s farmers was closed to the press so people can contribute without worrying about reporters in the room and how they may characterize their contributions,” Bowman said in an email. She also called it a “desperate attempt by the Sierra Club to distract from the work we are doing to provide regulatory relief to the people who have been negatively affected by the overreach of the previous administration.”

University officials also later said the officer’s claim that the site was “private property” was wrong. But the University of North Dakota Police Chief Eric Plummer also explained the EERC is a “restricted facility” based on university policy where visitors are requried to sign in and are escorted by EERC personnel throughout the building. He said it’s a restricted facility because of the research, the chemicals and the other business that’s conducted in that facility.