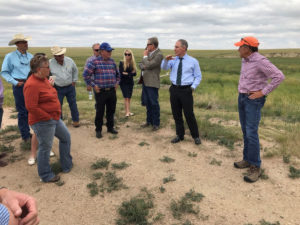 The EPA’s extended the comment time on the agency’s efforts to repeal that controversial WOTUS rule, the one Scott Pruitt and Oklahoma leaders fought when it was proposed by the Obama administration.

Pruitt, the former State Attorney General is also part of a video released by the National Cattlemen’s Beef Association.

“This record being made is so important because it helps us make informed decisions,” said Pruitt in comments shown in the video. However, he did not comment on what farmers and ranchers should say in their formally submitted comments.

The comments came in an appearance Pruitt made this month during a visit with farmers and ranchers in Last Chance, Colorado.

The new deadline is Sept. 27 as Pruitt wants his own version of the rule defining what wetland areas will be subject to regulation of the Clean Water Act.