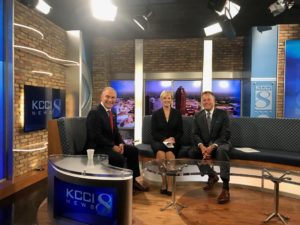 EPA Chief Scott Pruitt says the recent draft of a new climate report contains what he calls a “false narrative” of the fears that he and President Trump might dismiss the findings.

It’s what he told a Des Moines, Iowa TV station over the weekend.

“The report doesn’t impact the process,” said Pruitt in a Sunday morning interview with KCCI when asked whether he might ignore global warming data that doesn’t fit with the administration’s political agenda.

The report includes the findings of 13 federal agencies that contend climate change is already affecting the U.S.

“It doesn’t impact the responsibilities that we are taking already with respect to CO2,” added Pruitt. “And so I think some of those are simply legend and false narrative that people try to put on the marketplace.”

The draft of the National Climate Assessment is in opposition to what Pruitt and others in the administration argue about the causes of climate change. But it still has the attention of Pruitt, the former Oklahoma Attorney General who told a Dallas radio show last week that the EPA and the other 12 agencies would review the report’s methodology.

Pruitt said the report should be subjected to objective peer review. He added that science should not be “thrown around to dictate policy in Washington, D.C.”

“If we really care about our environment and CO2 reduction, then we ought to produce more here, because we do it better than India, we do it better than China, and people who have traveled to those places know that. They know that from the air that they breathe there,” he said in the Sunday interview in Des Moines.