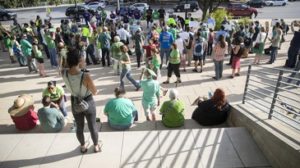 Those in the oil and gas industry might view what happened Thursday night in Austin, Texas by saying, “they don’t call Austin weird for nothing.”

More than 100 people rallied outside city hall in a call for the city to stop using fossil fuels to power the city.

The city recently adopted a plan which increases the goal of the percentage of renewable energy generated for the city from 55 percent to 65 percent. It even includes a contingency that the mandate could be raised to 75 percent.

“It doesn’t go far enough,” said Bob Hendrix, one of the dozens of people who wore green t-shirts and outfits and protested the city’s power generation plan. “I want to have more about climate justice renewables and early retirement of fossil resources.”

Other protesters clamored for the city to create 100 megawatts of battery storage. But environmentalist Paul Robbins called the idea “ludicrous” and said it would lead to astronomic costs.

But the protesters had their say to the city council, according to the Austin Statesman.

“I want my future and my children’s lives to not be hot. No cold winters and no boiling hot summers,” said Gabriel Lassiter, a 9-year old boy who urged the council to support a goal of 100 percent renewable energy.