Gasoline Averages $2.13 a Gallon in Oklahoma…..5th Lowest in the Nation 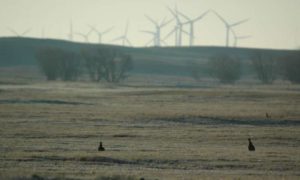 A new study suggests maybe those wind farms around the Midwest aren’t so harmful to the greater prairie chicken. A new study from the University of Nebraska found that while the spinning wind turbines kill hundreds of thousands of birds a year, the turbines actually become home to birds on the ground. Namely, the greater prairie chicken whose numbers have been dwindling with the expansion of farmland in the country.

The two-year study, published this week in The Condor: Ornithological Applications, stated the greater prairie chicken nests around the wind farms. They certainly don’t avoid the farms and the wind operations don’t appear to have an impact on nest survival.

The results of the Nebraska study are certainly in contrast to reports made just two years ago as reported by Newsweek.