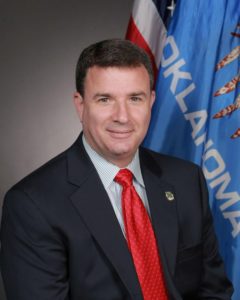 He replaces Robert Gilliland whose term ends Aug. 25. Liotta has completed two years of a six-term term after being appointed by the Governor.

“Mark is aware of the critical role the Workers’ Compensation Commission has in our state,” said Fallin. “During his time on the commission, he has worked hard so our system is saving businesses hundreds of millions of dollars, and injured workers are being treated fairly, getting help, and getting back to work quickly.

Liotta, of Sapulpa, was serving as chief deputy to the Tulsa County Board of County Commissioners and as chairman of the Oklahoma Employees Insurance and Benefits Board, which used to be known as OSEEGIB, the Oklahoma State and Education Employees Group Insurance Board, when the governor appointed him to the Workers’ Compensation Commission in April 2015.

Additionally, Oklahoma businesses since 2013 have seen a reduction of 30 percent in their premium costs.

Liotta served seven years as an infantry officer in Oklahoma’s 45th Infantry Brigade, where he commanded mortar and rifle platoons. From 1996 to 2006, he was elected to five terms in the Oklahoma House of Representatives, where he served as chairman of the House Republican caucus, appropriations chairman for general government and transportation, and a presiding officer of the House floor.