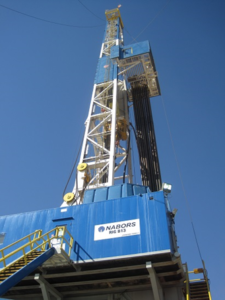 Houston-based Nabors Industries, a world-wide firm with big operations in Oklahoma is making an all-stock deal worth more than $215 million to buy Tesco.

Both oil field services companies operate out of Houston and the move will allow Nabors to strengthen its drilling and well construction. Nabors, according to analysts is building on its position as the world’s largest owner of drilling rigs.

It is an all-stock deal in which Nabors acquires Tesco at a 19 percent premium from its closing share price on Friday which was less than half of its value at the start of 2017. The deal values Tesco at $4.62 a share compared to the Friday close of $3.90.

Nabors has about 13,000 employees compared to the 30,000 it once had. Tesco, a company founded in Calgary but eventually moved to Houston about a decade ago has about 1,200 workers.

Nabors has an operation along I-40 at El Reno. It owns 406 land-based drilling rigs along with 41 offshore rigs and 35 offshore platforms.