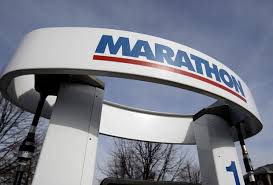 Both the STACK and SCOOP continue giving up large wells to a variety of companies.

Houston’s Marathon Oil Company reports a well near Kingfisher, one of three making up a multi-unit operation is producing 1,055 barrels a day. Located about 2 miles northeast of Kingfisher, 12 16N 7W the Hansens well also is producing 3,184 mcf of natural gas. A second Hansens well had completion of 1,026 Boed along with 3,640 Mcf of gas. The third well in the unit produced 460 Boed. All had spud dates in February with drilling finished in March and April with completions made in June.

Word of the two large wells came as Marathon Oil announced Wednesday it was shutting down operations at its Galveston Bay, Texas refinery because of widespread flooding. Floodwaters in downtown Galveston were 3 feet deep as the company made its announcement.