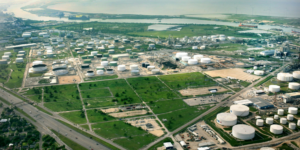 The move came as the company’s 200 employees at sites there and in Corpus Christi were personally affected by the storm but reported to be safe.

By mid-afternoon Monday, the company issued a statement indicating “all inbound and outbound refined products and crude oil, including Longhorn and Bridge Tex transportation services on the pipeline system in the Houston area remain suspended.”

The actual shutdown of the flow of oil was carried out on Sunday following suspension of operations last Thursday at the company’s terminal and condensate splitter in Corpus Christi.

With the improvement of conditions in Corpus Christi, the company has initial assessment of damages underway.

“At this time, it appears that the Corpus Christi facility did not suffer any major damage,” said the company in its Monday afternoon announcement. “Currently, we do not have a timetable to return to normal operations at any of our south Texas facilities.”