Plains Intends to Replace Pipeline Over 2015 Leak in California 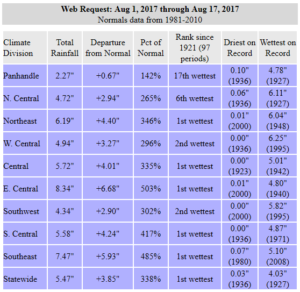 The Wednesday afternoon and night time thunderstorms in Oklahoma did their best to wipe out the drought in the state.

The statewide average rainfall total now stands at 5.47 inches according to the Oklahoma Mesonet. It means the new rainfall total has resulted in the seventh wettest August since records began in 1895.

The latest rainfall also means the state is only 12 hundreds from becoming the 6th wettest August. State Climatologist Gary McManus said in his Thursday Mesonet update, “It has fully eradicated the drought in the state. There are still some areas that are questionable between moderate drought and the non-drought status of abnormally dry.” 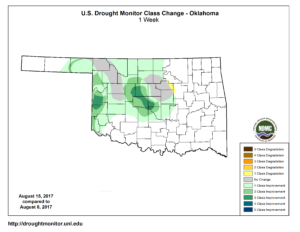 McManus calls it a “reverse summer” where May and June,months typically with a lot of rainfall were filled with “blast furnace temperatures.”  The heat came in June and July  while August produced bountiful rainfall. 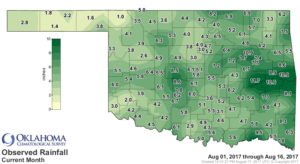