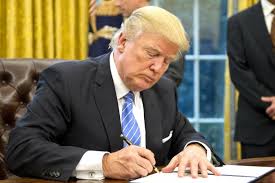 President Trump might have been criticized over his continued statements about the violence in Charlottesville, Virginia, but he’s being praised by Sen. Jim Inhofe for signing an executive order on another front.

The President’s order pertained to streamlining the infrastructure permitting process.

“The President’s executive order shows his commitment to improving America’s infrastructure by taking clear steps to shorten the obscure and exhaustive permitting requirements for infrastructure projects,” said Inhofe, who chairs the Senate Environment and Public Works Subcommittee on Transportation and Infrastructure.

Inhofe said the order implements many of the reforms he fought to include tin the FAST Act, “including streamlining project permitting processes and forcing concurrent environmental reviews, so job-creating projects can get started sooner.”

The FAST act is formally known as the Fixing America’s Surface Transportation Act.

The Senator explained the reforms are designed to ensure that even the most complicated and largest infrastructure projects can be permitted within two years.

“No more black boxes. No more guessing—now we will get projects done,” said the Senator.