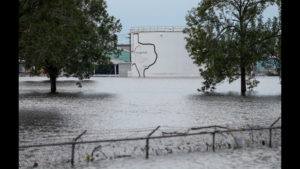 A flooded chemical plant that forced the evacuation of residents in Crosby, Texas exploded twice early Thursday.  Arkema Group, one of the world’s largest chemical companies had warned on Wednesday the plant stood a good chance of exploding because there was no longer electrical power to cool potentially dangerous chemicals.

Floodwaters had flooded emergency generators at the plant located about 20 miles northeast of Houston. It had been without electricity since Sunday.

The French company issued an early-morning statement on Thursday.

“We want local residents to be aware that product is stored in multiple locations on the site, and a threat of additional explosion remains,” the statement said. “We have been working closely with public officials to manage the implications of this situation. As agreed with public officials, the best course of action is to let the fire burn itself out.”

Earlier, a spokeswoman, Janet Smith had informed the Associated Press that a fire was inevitable.

“It will resemble a gasoline fire. It will be explosive and intense in nature.”

Organic peroxides used in products such as kitchen countertops, industrial paints, PVC piping and polystyrene cups and plates are manufactured at the plant. The chemicals have to be maintained at low temperatures but with the containers out of commission because of a lack of electrical power, an explosion was being predicted by the company.

Residents within one and a half miles of the plant were evacuated on Tuesday and air traffic near the site was closed by the Federal Aviation Administration.

“We have an unprecedented 6 feet of water throughout the plant. We’ve lost primary power and two sources of emergency backup power. And as a result, critical refrigeration needed for our materials on site is lost,” Richard Rowe, chief executive of the company’s North America operations, said Wednesday in a conference call with reporters before the blasts.