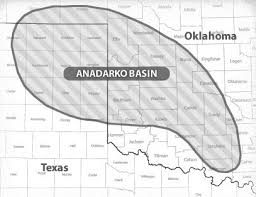 The drilling activity in Oklahoma’s STACK and SCOOP oil plays has increased so much in the past 7 months, the Anadarko Region’s rate of increase is second only to the Permian Region so far this year.

The Anadarko was recently added to the Energy Information Administration’s Drilling Productivity Report. The EIA said the region accounted for 437,000 barrels a day of crude oil production as well as 4.9 billion cubic feet a day of natural gas production in July 2017.

The increase was largely due to more exploration as the Anadarko Region went from 84 oil and gas rigs in January to 129 in July. the region’s production accounted for 13% of all new wells drilled nationally in July 2017. It also means the expanded Drilling Productivity Report issued by the EIA covers nearly 87% of all active onshore rigs in the entire country.

The Region actually covers western Oklahoma and the northeast corner of the Texas panhandle. And with its proximity to the trading and distribution hub in Cushing, growth is anticipated. Lower transportation costs could result in higher profits, prompting drillers to explore for more oil and gas in a low-price environment.