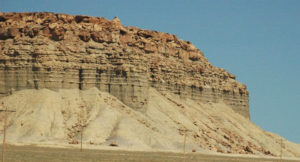 It’s just possible that some of the big gas plays in the U.S., the Marcellus, Haynesville, Anadarko-Woodford and even the Granite Wash will see competition from northwest New Mexico. One company’s announced a stunning discovery just west of Oklahoma.

BP claims the area around Farmington, New Mexico is a significant new source of natural gas for the country. The Houston, Texas company announced it “has brought online a highly productive natural gas well in the Mancos Shale.”

It said the early production rates at the NEBU 602 Com 1H well in San Juan County are the highest achieved in the past 14 years within the San Juan Basin. The Basin spans southwest Colorado and northern New Mexico. The well had an average 30-day initial production rate of 12.9 million cubic feet a day. 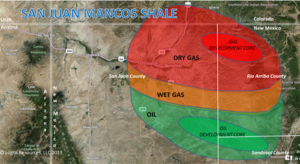 The assets on which the well was discovered were acquired two years ago by BP.

“We are delighted with the initial production rate of this well,” said Dave Lawler, CEO of BP’s U.S. Lower 48 onshore business. “This result supports our strategic view that significant resource potential exists in the San Juan Basin, and gives us confidence to pursue additional development of the Mancos Shale, which we believe could become one of the leading shale plays in the U.S.”

The well was drilled with a 10,000 foot lateral in an area known as the Northeast Blanco Unit, part of federal lands located in San Juan and Rio Arriba counties where BP has had a presence since the 1920s.

As a result of the major find, BP Lower 48 plans to open a new headquarters office in Denver in 2018 so it can be closer to most of its operated oil and natural gas production assets in the Rocky Mountain region.