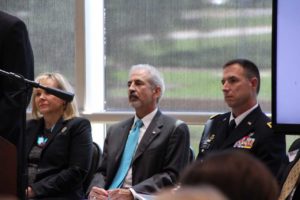 Some details were revealed earlier in the week but on Wednesday, a third news conference was scheduled in Tulsa. Earlier announcements had been made in Oklahoma City and Enid, showing an estimated $44 billion economic activity from airports, off-airport aviation and aerospace businesses and military aviation.

It was a two-part study of Oklahoma’s public airports including civilian and military. The state has 109 airports in the Oklahoma Airport System and the state’s three Air Force bases: Altus, Tinker and Vance.

“Aviation and Aerospace is extensive in Oklahoma,” said Victor bird, Director of the OAC. “Many of us knew aviation was big in Oklahoma, now we know just how big it is. This study provides the foundation for system planning and future investment in our airport system for decades to come.”

The study also measured the impact of off-airport aerospace businesses and learned there are more than 870 businesses not located on airports that are in the aviation and aerospace industry.

The study also considered how non-aviation businesses such as Devon, Quik Trip and Michelin use aviation to be more efficient. It also looked at agricultural aviation, aviation education, emergency medical and healthcare supported by aviation and the unmanned aerial systems industry.