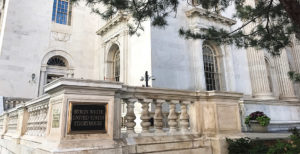 It is a matter of waiting…..weeks or months for the Denver Federal Appeals Court to rule whether the federal government has the authority to regulate hydraulic fracturing on public and tribal lands.

Arguments were made in the fight on Thursday before the 10th U.S. Circuit Court of Appeals as industry groups contended the Interior Department does not have the authority to implement the rules created by the Obama administration.

A Wyoming federal judge had ruled earlier that the government did not have the authority to regulate fracking. And as E and E reported, the three judges who heard the oral arguments were skeptical about freezing the case as the Trump administration now wants.

So the appeals court has several options—-freezing the case, overturning or upholding the lower court ruling or issue a decision based on the merits in the case.