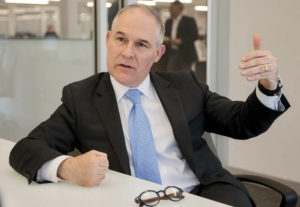 EPA Administrator Scott Pruitt scoffs at the idea among environmentalists and national media that he’s using the office for greater political motives—maybe a run for Governor in Oklahoma.

It’s what he made clear in a recent interview with The Oklahoman and a story published July 31.

But he also would not give an immediate indication that he planned to remain as EPA administrator.

Pruitt discussed a number of other issues as well including some controversial decisions about a pesticide used in agriculture production, the debate over the climate and his decision to be friendlier with the oil and gas industry.