Oil and Gas Activity in STACK and SCOOP Grows 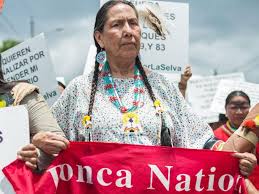 Thursday will mark a “Play-In for Climate Action” rally in Washington by moms and their children and one of them will be Oklahoma environmentalist activist Casey Camp-Horinek.

She describes herself as an actress, a Native rights activist and environmentalist and will be one of the speakers at the Capitol Hill protest. Camp-Horinek’s a leader of the Pawnee Nation and took part in last year’s protests at the Dakota Access Pipeline in North Dakota.

She also took part in a New York City protest last spring at Citigroup’s annual shareholder meeting where two top executives admitted they had moved too quickly in approving investments in the Dakota Access Pipeline project.

The Play-In for Climate Action is in its 4th year and promoters say this year’s event takes on special urgency because of the Trump administration’s decision to pull out of the Paris Climate Agreement. The group says a new survey showed the majority of U.S. mothers and grandmothers are concerned about climate and air pollution.

Organizers are calling Thursday’s even a “family friendly” demonstration at the Upper Senate Park on Capitol Hill. Two Democratic members of the U.S. Senate Committee on Environment and Public Works, Senators Jeff Merkley of Oregon and Sheldon Whitehouse of Rhode Island will speak to the rally.