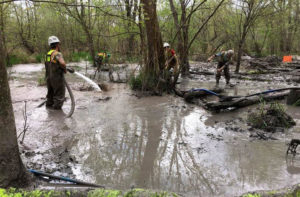 The Ohio Environmental Protection Agency maintains it attempted three times to reach the company and have it create a plan for such spills. But the state EPA never received a response from the company following any of the three attempts. So now the state is filing a civil lawsuit against the company seeking $914,000 in damages.

The suit is in response to what the agency maintains was 27 violations on the Rover pipeline and more spills last week near the Tuscarawas River.

“The Sierra Club applauds Ohio EPA for taking action against Energy Transfer’s reckless construction of a dirty and dangerous fracked gas pipeline. We’ve always said that it’s never a question of whether a pipeline will spill, but rather a question of when. necessary.”