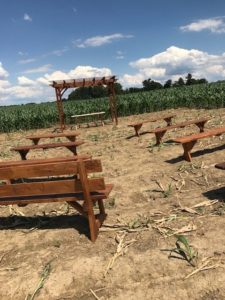 Tulsa’s Williams Partners has run into opposition from some Pennsylvania nuns as the company tries to build a natural gas pipeline.

The sisters are members of the Catholic Adorers of the Blood of Christ and to show their opposition to the 183-mile long pipeline, they’ve built a prayer chapel on the proposed right of way. The chapel went up as Williams Partners asked a Lancaster county judge for an emergency order to seize the land. No ruling has been made.

The chapel is “a blatant attempt to impede pipeline construction,” said a company spokesman referring to what the nuns did on the land they own in West Hempfield Township in Lancaster County.

But the nuns, who also operate Newman University in Wichita, Kansas  and have regional offices in St. Louis have joined forces with Lancaster Against Pipelines. They also adopted what they call a Land Ethic which honors the sacredness of creation, reverences earth as a sanctuary where all life is protected and treasures land as a gift of beauty and sustenance and legacy for future generations.

However, the courts might have another belief. Transco has received approval from the Federal Energy Regulatory Commission to construct the pipeline for the Atlantic Sunrise Project.