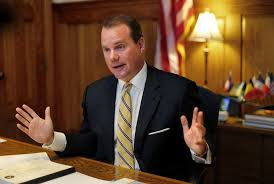 When it comes to energy, Lieutenant Governor Todd Lamb not only talks with a lot of it, but believes the state must rely on other industries besides the energy industry.

He contends the state has never seriously pursued the diversification. Case in point—-the state of Texas.

“How did they do it? A pro-growth public policy which Oklahoma has caught up with. Lawsuit reform of 2007 and workers comp reform of 2013, but our most important goal should be organic growth in Oklahoma,” said Lamb.

He said the state needs to increase its exports.

“Bio-science is an industry where we’ve an exponential growth. Aerospace and aviation–rich history in Oklahoma but somewhat overshadowed because of our energy industry. And one industry that’s overlooked goes by a lot of names—data processing, information technology or computer sciences.”

But when it comes to the economic challenges of state government, Lamb suggests the legislature is overlooking a major cause of its growing budget holes. Just this year, the legislature struggled with an $878 million budget hole and legislators stripped the wind industry of its tax credits and talked of raising the gross production tax on oil and gas.

But what about the billions of dollars in other tax credits that were not touched by legislators?