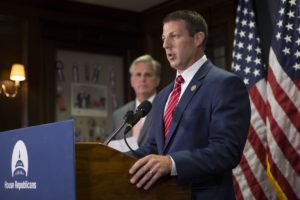 Standing next to Mullin, the speaker gave credit to him for his work on the energy aspect of the new budget proposal.

“The potential we have for energy in this country is limitless. It’s exciting and that’s why we’re taking action this week. And I want to also thank Markwayne Mullin for his work on this particular issue,” said Ryan.

He went on to say the plan means lower prices, more jobs and more opportunities for manufacturers as well as for small businesses.

“That is why we are working on also reforming our tax code. It’s too confusing. It’s too expensive. And we want to simplify the tax code and bring down rates to give people real relief and real peace of mind.”