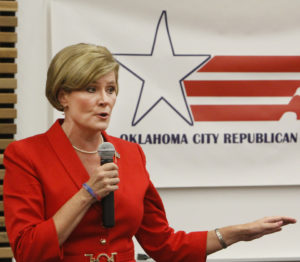 When Patrice Douglas served as an Oklahoma Corporation Commissioner, she had obvious differences with the other woman on the commission—Dana Murphy. Now Douglas has come out with an endorsement of Murphy’s opponent in the race for the Republican nomination for Lieutenant Governor.

She has endorsed former state GOP chairman Matt Pinnell, also a candidate to be the state’s number two leader.

“Serving as Mayor of Edmond and later on the Oklahoma Corporation Commission, I saw firsthand some of the many challenges our communities and our state face. Matt Pinnell has a talent and passion for Oklahoma that will help lead our state forward as we confront these challenges,” said Douglas in a statement. “Whether in the political arena or as a small business owner, Matt has a proven track record of success that Oklahomans can rely on. That’s why I’m proud to endorse Matt as our next Lieutenant Governor.”

Douglas was appointed to the Corporation Commission in 2011 to replace Jeff Cloud. She was elected without opposition in 2012, then two years later ran for the U.S. House in Oklahoma’s 5th congressional district, losing to Steve Russell in the primary.

Commissioner Murphy announced her candidacy on Wednesday rather than seeking re-election to the Commission. She has an Aug. 9 fundraising event.

Two other candidates for the GOP nomination for Lieutenant Governor have also announced. They are Eddie Fields and Dominique Damon Block.