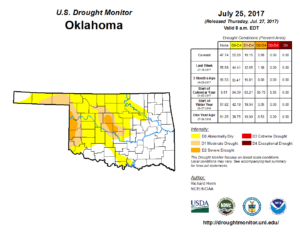 While some rain was finally reported in northern and central Oklahoma early Thursday, by all appearances the breadth of dry conditions in the sate is growing.

The latest Drought Monitor report shows growth just in the past week, according to the Oklahoma Mesonet and State Climatologist Gary McManus.

He described it as “an intensifying drought from west central through central OK.”

McManus indicated 4 percent of the state is in a severe drought and “building.” Just in the past week, it had increased from about one percent.

Last week, 56 percent of the state had no dry conditions but the figure this week is 48 percent.

At least 52 percent of the state is abnormally dry and it had been 44 percent a week ago. Sixteen percent is in a moderate drought while a week ago, it was 12 percent.