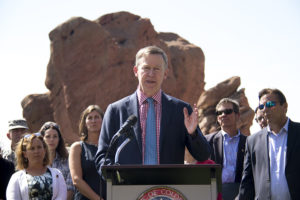 Colorado’s Gov. John Hickenlooper announced this week he intends to join another dozen states in an attempt to comply with the Paris climate accord.

Oklahoma is not one of those dozen states.

“We will join the Climate Alliance because our voices are more powerful when we speak as one,” said the Democratic governor as he stood at the Red Rocks park west of Denver. He also revealed his own plan to slash greenhouse gas emissions 26 percent from 2005 levels by the year 2025.

It is an obvious attempt to oppose President Trump’s decision to withdraw from the Paris Climate agreement.

“It is true that 97 percent of climate scientists believe the climate is changing rapidly, probably with catastrophic consequences if we do nothing,” said Hickenlooper. “But it’s not my intention to lecture or try to persuade those who don’t agree with the science.”

Hickenlooper’s plan calls on power companies to voluntarily work with the state in doing more to work toward ‘green’ energy. It also sets a goal of decreasing Colorado’s electricity sales 2 percent a year through energy efficiency measures. Beyond that, details of the plan he signed were not revealed.