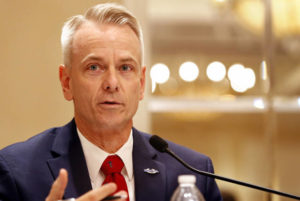 Oklahoma U.S. Rep. Steve Russell was blunt over the weekend when asked what he thought of the Trump administration’s plan to privatize the nation’s air traffic control system.

“I think it’s the dumbest thing we’ve ever thought about doing,” said Russell during the Oklahoma Associated Press Convention. “I realize I’ll be swimming upstream on this issue because everybody, like a pack of dogs lapping up antifreeze, thinks this is a good idea.”

Reporter Dale Denwalt with The Oklahoman wrote that Russell said the plan will fail if it’s adopted.

“We’ll have less safety, reduction in pilots learning to train and a major unfunded liability impact for national defense.”