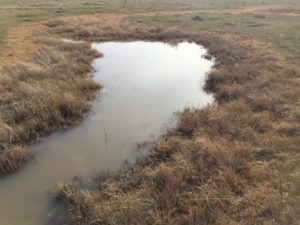 While wastewater and its links to earthquakes is the news in Oklahoma, in North Dakota, it’s the case of a polluter being caught dumping wastewater into a rancher’s pasture.

The North Dakota Industrial Commission voted this week to revoke the permit of Apollo Resources, a company caught intentionally pumping drilling mud and wastewater onto the pasture last fall in McKenzie County. The action was taken because the company had also not done enough to clean up the seven-month-old pollution site.

Lynn Helms, director of the Department of Mineral Resources in North Dakota said Apollo Resources also had a reputation of not following state regulations.  It is estimated up to 20 acres of the pastureland were affected by the contamination.

The state inspector who caught the illegal dumping said cleanup should have taken only about a week. But because there was no immediate response, the melting of snow this spring spread the brine contamination.

An estimated 80 barrels of the saltwater was dumped into the pasture.