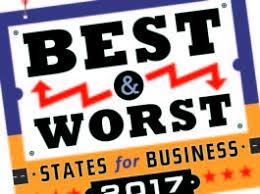 Oklahoma comes in ranked 17 in a new survey of Best and Worst States for Business Ranking by Chief Executive magazine.

Gov. Mary Fallin observed the new ranking comes despite the recent economic downturn in the state and was an improvement of one from 2016.

“We are constantly working to promote Oklahoma as a desirable place for business, and to further strengthen our business climate,” said the governor. “States like California, New York and Illinois find themselves among the worst states for business according to CEOs.”

She called it an opportunity for Oklahoma to showcase strengths and set apart from those states.

Oklahoma also ranked No. 10 in the Top 10 States for High-Tech.

Texas was at the top of the overall list, a state with $232 billion in exported goods in 2016 and the second-largest state airport system. It also has deep-water ports and more than 10,000 of freight rail, the most of any state.

The worst states on the list? California was ranked 50 and New York was 49.