Sen. Lankford Pushes for Congressional Control of Sanctions Against Iran 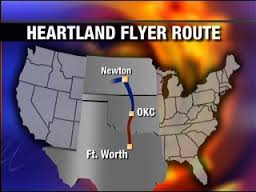 If Amtrak eventually decides to extend its Heartland Flyer route northward to Wichita, Kansas—–the Tulsa World says Oklahoma City should pay for it.

It was last week when Amtrak made an experimental passenger run from Oklahoma City to Kansas City.

In an editorial this week, the paper’s writers pointed out how the state made a promise when public funding of train service from Oklahoma City to Fort Worth was considered. That promise was—–Tulsa would be next.

“That promise is now forgotten by the people in Oklahoma City pushing a different route,” said the paper which suggested Wichita is a higher priority in the state than Tulsa.

“Here’s a better idea: Let’s let Oklahoma City pay for the whole thing — including the service to Fort Worth. They’re the only ones getting any value out of it, after all.”