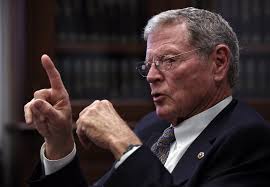 Make it at least five, maybe six former staffers of Oklahoma U.S. Sen. Jim Inhofe at the Senate’s Environment and Public Works Committee to move on to the Environmental Protection Agency. It’s clear the 82-year old republican Senator is having an impact on the giant agency he has criticized under the Obama administration.

The latest is Daisy Letendre, a spokeswoman for the EPW committee and Inhofe’s office. She took over as Communications Director at the Senator’s office in November of 2016, replacing Donelle Harder who’s now with the Oklahoma Oil and Gas Association. Letendre had previously worked on the Environment and Public Works Committee.

Her assignment at EPA will be strategic communications in the agency’s Office of Policy.

“Daisy will be a welcome addition to our team, to help us communicate the important actions that EPA is taking to implement a positive environmental agenda,” said Liz Bowman, a spokeswoman at EPA.

Why have so many Inhofe aides gone to the EPA? As the Washington Post pointed out in a mid-March story well before Letendre’s departure, Inhofe’s former chief of staff Ryan Jackson is now chief of staff to Scott Pruitt, Administrator at the EPA. Jackson worked for years with the Senator.

As the Post reported in March, “Now the man critics once dismissed as a political outlier has an unprecedented opportunity to shape the nation’s energy and ­environmental policies. And he has helped populate the upper ranks of the agency he has derided with several of his closest confidants.”

In addition, other Pruitt senior advisers on air, climate and legal issues are also Inhofe alumni. Two are also top domestic and international energy and environmental advisers to President Trump.