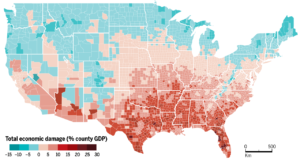 Oklahoma and several other states will feel the greatest impact of global warming according to a new report that studied how it will affect the U.S.

Published in the journal Science, the study explored the economic pluses and minuses for more than 3,100 counties. A map that was included in the study shows the growing impact moving northward as the nation enters deeper into the century.

Researchers studied the possible effects for each county.

Along with Oklahoma, other states that could be hurt in such a global warming would be Missouri, Kansas, Arkansas, Kentucky and even southern Illinois.

The study claimed that seven of the 10 counties to be hurt the hardest economically from climate change are in Florida. Two others are in Texas and one is in Georgia.

Counties benefitting the most from global warming are in Michigan, Alaska, Colorado, Nevada and the mountainous region of North Carolina.