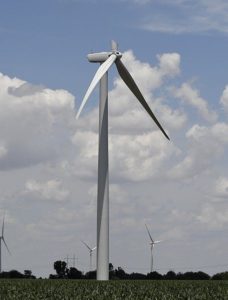 Florida-based NextEra Energy is investigating an incident involving a catastrophic turbine blade at its Breckinridge wind farm project in Garfield County, according to a report by Ryan Miller of The Enid News & Eagle.

Data from NextEra turbine monitors revealed the unit went offline on Wednesday night around 10 p.m. The damaged GE blade broke off one of the 1.7 megawatt XLE 3-blade turbines.

The Breckinridge project began commercial operations in August of 2015. It’s located about 10 miles east of Enid. NextEra generates 98.1 megawatts of energy from its 171-turbine wind farm at Breckinridge.

NextEra is working with the equipment manufacturer to obtain a replacement blade. Meanwhile, the company will inspect the project’s wind farm blades to access any further risks associated with damage to the turbines, equipment and property.

“We believe this was an isolated equipment issue, but we are inspecting each of the turbines at the wind farm to ensure they are operating normally,” said Bryan Garner, spokesperson for NextEra. “Blade failures are very rare.”

No injuries were reported. The cause of the turbine failure remains under investigation.

(Photo credited to Billy Hefton of The Enid News & Eagle)