Gasoline Prices Take Another Plunge in OKC and Across the State 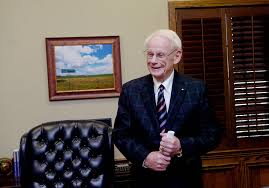 The founder of the Rip Griffin travel centers in Texas and Pro Petroleum and Griffin Transportation with truck terminals in Oklahoma and five other states has died at the age of 87.

B.R. Griffin, better known as “Rip” opened his travel centers in and around Lubbock, Texas where he was a huge Red Raiders supporter and fan.

While rolled at Texas Tech in 1953, Griffin hauled gasoline on the weekends and also served as a bookkeeper for a trailer company. He went to work for Texas and eventually opened a chain of truck stops. Griffin sold the chain in 2004.

It was in 1964 when he opened the Rip Griffin Truck Service center and founded Pro Petroleum Inc. in 1989. Pro Petroleum now has more than 100 delivery trucks located in a 10-state region. Truck terminals are located in Arizona, Arkansas, New Mexico, Nevada, Oklahoma and Texas.

A memorial service for “Rip” Griffin will be held June 27 in Lubbock.