Ethanol Plant Blast Kills One, Injures More than a Dozen Others in Wisconsin 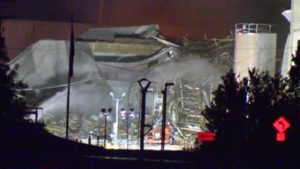 An explosion at an ethanol plant in Wisconsin late Wednesday left one worker dead and nearly a dozen others injured.

It happened at the Didion Milling plant near the town of Cambria which is located northeast of Madison.

The blast left the main building in ruins. Sixteen workers were in the structure at the time, according to Columbia County sheriff Dennis Richards. Two escaped unhurt while the others were rushed to a local hospital for treatment.

Reports indicated at least 37 different agencies responded to the blast including the Red Cross.