Rep. Russell says Paris Climate Accord was a “Giant Transfer of US Wealth” 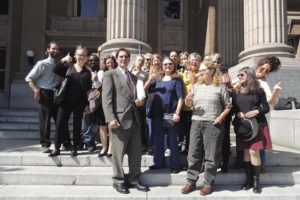 Environmental activist Ken Ward in Washington State has been convicted of second degree burglary after he shut off an emergency pipeline valve in a climate change protest. He faces up to ten years in prison and $20,000 in fines, according to a report in The Seattle Weekly.

The incident occurred last October at a tar sands pipeline. The jury couldn’t reach a verdict on a “sabotage” charge but found him guilty on the burglary conviction. Ward will learn his sentence on June 22.

Speculation is he might spend a year or two in prison since he has no prior felony convictions.