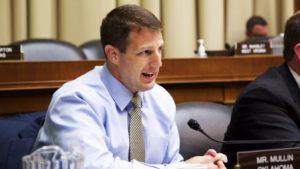 The two sided up to introduce H.R. 2883, the Promoting Cross-Border Energy Infrastructure Act which is meant to encourage and promote the construction of energy infrastructure across border lines with North American neighbors.

“Energy production in the United States plays a vital role in our country’s job creation and economic growth,” explained Rep. Mullin. “This act simplifies the construction and operation of energy facilities that cross international borders.”

He said it restructures the process so cross-border pipelines can deliver lower costs to consumers and create more jobs in the energy field, “rather than these energy projects being politicized or hung up in regulatory uncertainty.”

Congressman Green, who sits on the House Energy and Commerce Committee with Rep. Mullin, said the bill will allow the U.S. to lead a unified energy sector with its neighbors.

“As energy production in the United States continues to grow it is essential that we have the infrastructure necessary to support the industry,” he added. “These projects should undergo an effective and responsible process for approval and not be subject to political calculations or obstructions.”

The two pointed out that energy trade among the U.S., Mexico and Canada in 2015 was valued at more than $140 billion. They said their bill would create transparent and reliable procedures to provide regulatory certainty and enable the U.S. to expand its energy relationships with the two countries.