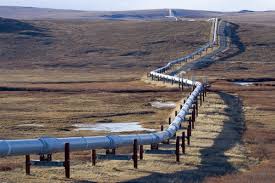 As the 40th anniversary approaches for the Trans Alaska Pipeline System, the observation is being noticed in Tulsa, Oklahoma.

That’s the headquarters for the Pipeliners Local Union 798 whose members were the welders who built the 800 mile-long pipeline.

They were the ones who welded the 40-foot sections of 48-inch pipe beginning March 27, 1975. By the time the pipeline system was finished, the 798ers as they are called had put together 108,000 “girth” welds according to a report in Penn Energy.

Nearly 2,000 welders from the union were contracted for the massive undertaking. Nearly two years later, June 20, 1977, pump stations started pushing oil from Prudhoe Bay across Alaska and down to the lower 48.

Kevin Leeper was one of those welders who recalled the bitterly cold weather.

“The pipe sections had to be heated up in order to get a good weld. The lineup clamps would freeze to the inside wall of the pipe and we’d have to thaw them loose. The wind, the terrain, blizzards, everyday was a challenge,” he recalled.

Danny Hendricks was another.

“In those days the whole population of Alaska was probably 200,000. The pay was very good, the hours very long, the accommodations were adequate, the work was challenging, but everyone had that can-do attitude. We just kept at it and got it done.”