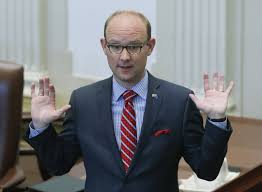 Speculation is growing among political observers at the State Capitol that a special session of the legislature is likely because legislators have yet to reach a budget agreement.

Political analyst Scott Mitchell is one of them, saying the House is further along than the State Senate.

“With only a few days left to negotiate a budget agreement, now’s the time legislators need to hear from you. They especially need to hear your support for ending tax breaks for the oil and gas industry and restoring the historical 7 percent tax rate on all gross production so that we can avoid devastating cuts and make critical investments in our workforce, infrastructure, and health.”

Gov. Fallin has yet to indicate what percentage she might support in raising the tax on oil and gas.

House Democrats, led by Rep. Scott Inman have the Republican controlled House between a rock and a hard place. They want an increase in the gross production tax and have the votes to block other measures.