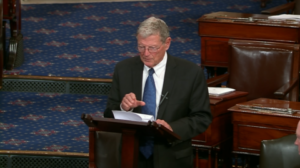 “If we remain in the agreement, we are putting ourselves at significant litigation risk.”  Sen. Jim Inhofe on Paris Climate Agreement.

Oklahoma U.S. Sen. Jim Inhofe is urging President Trump to withdraw from the Paris Climate Agreement, saying if he doesn’t, the nation could be dragged into court by environmentalists who want enforcement of regulating greenhouse gas emissions.

Speaking on the U.S. Senate floor this week, the Senator said, “If we stay in the Paris Agreement, environmentalists will be able to sue the EPA to force it to regulate greenhouse gas emissions under Section 115 of the Clean Air Act.”

He warned if the U.S. stays in the agreement, environmental groups led by the National Resources Defense Council, the Environmental Defense Fund and the Sierra Club will file lawsuits against the EPA as it takes legal steps to deregulate the Clean Power Plan.

“If the President stays in the Paris Agreement, he is putting at risk our ability to accomplish his campaign goals—namely ending the war on fossil fuels and rescinding the Clean Power Plan. He has already taken the executive steps he needs to no this front—and EPA is currently on solid legal footing—but we must not limit the effectiveness of these key steps by remaining in the Paris Agreement,” said the Senator.