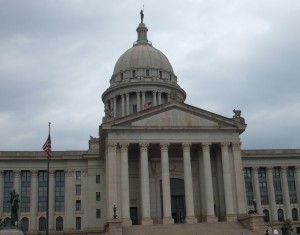 Three energy groups announced their support of a compromise bill that would expand horizontal drilling by allowing long-lateral drilling operations in all geologic formations.

The Oklahoma Oil & Gas Association, Oklahoma Independent Petroleum Association and the Coalition of Oklahoma Surface and Mineral Owners joined together in supporting Oklahoma Senate Bill 867, according to a joint press release issued on Tuesday.

“Thanks to the hard work of all stakeholders, the Oklahoma Energy Jobs Act will make available statewide the economic benefits of long-lateral drilling while also increasing protections for all operators in Oklahoma,” said Chad Warmington, OKOGA president. “This compromise legislation to address Oklahoma’s outdated red tape has been four years in the making. With passage, the Oklahoma Energy Jobs Act will allow the oil and natural gas industry to continue to create thousands of new jobs, grow our economy and generate new revenue for our schools, roads and public services.”

The measure was introduced Tuesday afternoon during the Joint Committee for Appropriations and Budget meeting and passed by a vote of 32 to 10. Designed to update the Shale Reservoir Development Act of 2011, Senate Bill 867 – known as the Oklahoma Energy Jobs Act of 2017 — allows long-lateral drilling in all geologic formations while also increasing protections for Oklahoma operators and mineral owners.

The bill appears to benefit education, employment and energy. It’s projected to generate nearly $490 million in additional royalty payments. With the School Land Trust being the largest royalty owner in the state, Oklahoma’s public schools and higher education will receive approximately $26.5 million in new direct funding.

The bill will also fuel $5.8 billion in additional direct and indirect economic activity throughout Oklahoma while generating more than $229 million in state and local revenue directly from the industry.

“One of the greatest groups to benefit from the Oklahoma Energy Jobs Act is our state’s public schools, colleges, and universities,” said Terry Stowers, COSMO’s executive director. “Oklahoma’s School Land Trust is the largest royalty owner in the state and this compromise legislation will generate roughly $26.5 million of new revenue for our education system within the first year. Oklahoma’s royalty owners overall will see $490 million in additional royalties, money that supports many of Oklahoma’s seniors who depend on their royalty checks for retirement and supports small businesses owners and college savings funds.”