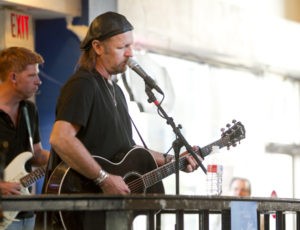 Red dirt music star Jimmy LaFave died over the weekend in Austin, Texas. He was 61 and grew up in Stillwater where he got his start in music while in high school.

The two had been acquaintances for 20 years when they became business partners.

It was last fall that their differences on energy and the environment came to the surface during the protest of the Dakota Access Pipeline in North Dakota.

“He is a Republican and I am a yellow dog Democrat. We disagree on the pipeline,” wrote LaFave in a lengthy Facebook post, defending his environmental beliefs and at the same time, his relationship with Warren.

“Music Road Records is not a part of Energy Transfer Partners. We have nothing to do with the pipeline business and I have no control on what Energy Transfer Partners, Enbridge and Phillips 6 are building there—-we are simply a self-supporting small label for starving artists. We use the money from each project to do then ext project and try to keep our head above water.”

He explained he asked Warren to help start a music business. And he defended Warren.

“I could also tell you the many tings that Kelcy has done for the environment such as helping save Caddo Lake and wind farms, etc. but I would probably be crucified for that…….I will let my life’s work be a testament to the type of person I am. I am a pro-environment, pro-Native American, pro-gay rights progressive human being.”

LaFave wasn’t the only Austin entertainer to speak out last fall as reported by Austin 360.