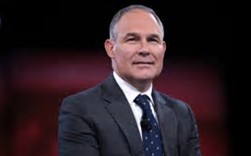 EPA Administrator Scott Pruitt will travel to Italy early in June to attend a Group of Seven meeting. It’ll be a face-to-face meeting with environmental minister who strongly support international climate action.

Pruitt will meet with six of his foreign counterparts on June 10 and 11. They sharply oppose his views. Pruitt, the former Oklahoma Attorney General has publicly denied climate change and opposes the U.S. participation in the Paris Agreement.

“I certainly hope that will lead him to decide to support remaining in this critical part of the global climate regime, instead of advocating for U.S. withdrawal, said Jonathan Pershing, former deputy special envoy for climate change at the State Department under President Obama. “I think further exposure of Mr. Pruitt to his counterparts in other countries will definitely help him better understand the issue.”

Pruitt’s trip will follow that of the president, who will be making his first trip abroad since taking office. In an interview on “Fox & Friends” yesterday morning, Pruitt said Trump would “probably” come to a decision about whether or not to stay in the Paris Agreement after he attends the G-7 meeting at the end of this month.