No New Wind Farms Built in Oklahoma in 1st Q of 2017….But Kansas Saw Significant Growth 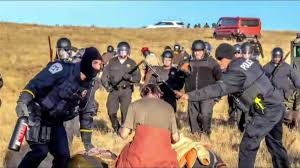 A bill born partially out of protests by environmentalists against oil and natural gas pipelines in North Dakota has been signed into law by Gov. Mary Fallin.

“This law isn’t about lost hunters or misplaced campers,” said Rep. Biggs.  “This law is about protecting our state’s most important and critical infrastructure by holding those who seek to do our state harm accountable.”

The misdemeanor level allows for a fine of $1,000 and up to six months in county jail for willfully trespassing onto property containing critical infrastructure.

As a state that has many military bases, miles of oil pipelines and hundreds of gas wells, the threat of people looking to do harm to Oklahoma’s critical infrastructure is real. The US Department of Homeland Security has gone as far to identify potential threat sources to specific Oklahoma assets.

“Oklahoma has a proud history in both oil and gas and our support of the military,” Biggs said. “It shouldn’t come as a shock to anyone that we want to protect these resources.”