Pruitt Tells Congressional Coal Caucus “War on Coal is Over” 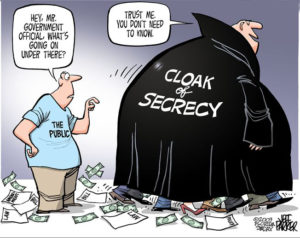 If Senators James Lankford and Elizabeth Warren get their way, the public will know every detail of legal environmental and enforcement settlements by federal agencies. Too often, some details of such settlements have to be uncovered either by snoopy reporters or environmentalists.

In what some might describe as “The Odd Couple,” the Republican Lankford and Democrat Warren have reintroduced what they call The Truth in Settlements Act. It is bipartisan legislation to increase transparency for major settlements reached by federal agencies.  And it would cover far more than just environmental issues.

The two senators said their bill will require more accessible and detailed disclosures about settlement agreements so that the public can better understand the agreements the federal government is making on their behalf.

Their complaint about some of the settlements is that agencies often tout the dollar amount obtained from the offender. But the numbers can be misleading because the payments might be tax deductible or might include “credits” that the settling party can earn toward the settlement amount. And in some cases, the agreements are confidential.

“Taxpayers deserve an open and transparent government that is accountable to the American people,” said Lankford. “The Truth in Settlements Act will ensure the federal government is held accountable for investigations and settlements that are often decided behind closed doors. Federal agencies work for the American people, agencies should show how they protected the taxpayer and followed the law, unless confidentiality is required.”

“Government accountability requires transparency, and that’s what this bipartisan bill provides,” said Warren. “The Truth in Settlements Act will shut down backroom deal-making by shining a light on federal agency settlements with lawbreaking companies. More transparency means Congress, citizens and watchdog groups can better hold regulatory agencies accountable for enforcing laws so that everyone – even corporate CEOs – are equal under the law.”