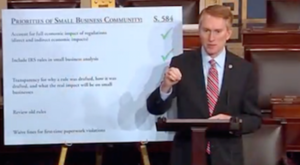 Whether it’s coal, wind or oil and gas, each of the industries in the state has small businesses and those businesses have to deal with a mountain of paperwork as a result of federal regulations.

U.S. Sen. James Lankford says it’s time for the federal government to eliminate some of those regulations that he calls “burdens.”

“For small businesses, it is not typically small regulations. It is the hundreds of little ones that they are constantly trying to live under,” said the senator in a recent speech on the senate floor. He cited the example of Julian Lumber company of Antlers, Oklahoma, a firm that makes wooden fence posts as well as treated telephone poles.

“Julian employs about 50 people, but recently had to shift a part-time employee doing compliance to being actually full time doing nothing but compliance 40-hours a week because of all the federal regulations,” explained Lankford. “When Robert Julian founded his business in 1974, he didn’t set out to create jobs for compliance officers, he actually set out to do lumber work. Unfortunately, his business now includes federal compliance.”