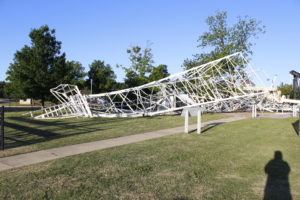 Those 75-mile-an hour winds that hit Oklahoma City over the weekend devastated some oil and gas historical items located at the Oklahoma History Center.

Among the losses…a restored wooden derrick and a derrick installed at the Capitol in 1934 and relocated just 12 years ago when the new history center opened.

“What we’re doing right now, we’re really rethinking our approach out there,” said Dan Provo, Director of the History Center in an interview with OK Energy Today.

When the towers collapsed in the gusting winds, they left minor damage to a boiler which was part of a cable tool rig. 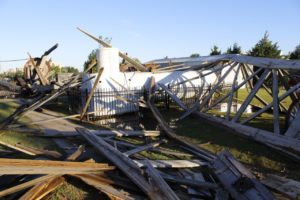 Provo said there is no damage estimate available as of yet. It’s unknown whether the loss of the historic derricks and pieces of equipment will be covered by insurance.

But Provo told OK Energy Today a meeting is planned for next week with Devon Energy Corp. and the Oklahoma Energy Resources Board to consider repairs and restoration of the small park.

A spokesman for Devon told NewsOK, “Devon has a long-standing relationship with the Oklahoma History center and will work with museum officials to assess the damage to the Devon Oil Field Park and determine next steps.”

Spokesman John Porretto said Devon wants to “ensure that the history of the oil and gas industry in Oklahoma is preserved.”

One estimate suggested the cleanup and restoration could cost $100,000.