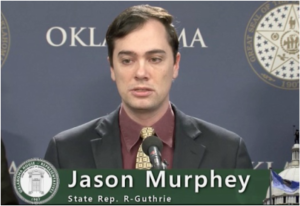 Guthrie Rep. Jason Murphey makes it clear he will vote against any plan to increase gasoline taxes in the state.

Writing in the McCarville Report this week, the Republican legislator said it is flawed logic to suggest gasoline taxes could be increase because the state already has one of the lowest such taxes in the nation.

He contends Oklahomans already are forced to pay for roads and bridges through a punitive and overlapping system of taxes and user fees.