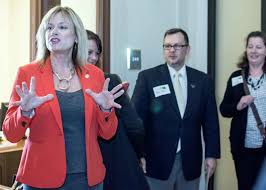 Even as the Oklahoma House debated and questioned the merits of a $6.8 billion budget bill hours before the sine die adjournment required on Friday, the nagging issue of gross production tax on oil and gas was brought up by Democrats.

Mustang Rep. Leslie Osborn presented SB 860, the budget bill and for nearly 90 minutes answered question after question—mostly from Democrats who opposed the measure.

But the GPT came up during questioning by House Minority leader Scott Inman and it resulted in a pointing of fingers of blame both by Osborn and Inman.

“We can talk all day about whose blame it is or whatever, but at the end of the day, this is the bill we were able to get it through that will fund core services. Could it have been more? Yes, but there’s people in the room that wouldn’t go there,” charged Osborn.

Inman countered he never had the opportunity to make any offer to increase taxes.

“What we can talk about is we are the body of the people. We are the Oklahoma House of Representatives. We can talk about what we do here and that offer was turned down and this is as good as it’s gonna get,” answered Osborn.

Listen to the debate that started with rep. Jason Dunnington of Oklahoma City.