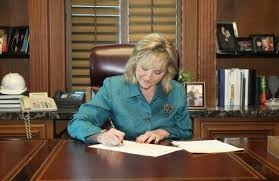 Legislation prohibiting public protests on sites with critical infrastructure was signed into law by Governor Mary Fallin last week. The bill, authored by Rep. Scott Biggs of Chickasha, was advanced as a preventative measure to impede disruptive protests.

Under House Bill 1123, anyone trespassing on critical property would be charged with a misdemeanor, resulting in a $1,000 fine, six-month jail term or both. If the trespasser intended to cause damage or impede operations, the fine increases to $10,000 with a one-year prison term.

Felony charges would be lodged against any trespasser who destroys equipment, punishable by a hefty $100,000 fine and a prison term up to ten years. Finally, if the trespass activities involve a conspiring organization, the fine is ten times the amount of the individual intruder.

Critics of the Dakota Access Pipeline protest in North Dakota contend that several organizations provided support to the protesters.

A similar measure – House Bill 2128, coauthored by Rep. Mark McBride and Rep. Jon Echols – allows a person who is arrested or convicted of trespass may be held liable for damages during trespassing activities. On Wednesday, the House adopted Senate amendments to advance the bill.